The Kingdom of Bahrain

The Kingdom of Bahrain is a member of a Customs Union with other five countries in the region. These countries are Saudi Arabia, Kuwait, Qatar, United Arab Emirates and Oman. This Union is called the Gulf Cooperation Council (GCC). As part of this Customs Union each country is responsible for collection of customs duty upon entry of foreign-origin goods into its domain. This is called the First Entry Point. If these goods are subsequently dispatched (wholly or partially) to another GCC country (Destination Country) for consumption then it is the responsibility of the first GCC country through its national Customs administration to remit the duty to the destination GCC country. The remitted duty is proportional to the value of re-exported goods.

In order to submit revenue claims to other countries within the GCC Customs Union and reconcile incoming claims against their own export figures, Bahrain Customs have, over the last three years, successfully operated the compensation regimes facility of TradeWorldManager (TWM), Webb Fontaine Customs Management system. The process has to date allowed Bahrain Customs to perform automatic reconciliation of foreign claims with export figures and has permitted timely production of claims for other GCC countries. The claims were sent to an XML gateway operated by the GCC Secretariat where all claims were centralized, and dispatched to countries.

In 2015 the GCC Secretariat overhauled the compensation gateway and fully automated the functionalities to cover full cycle from dispatch of goods to remittance of duty. The new system is called Automatic Direct Transfer (ADT).
Bahrain Customs affairs through TWM was able in record time to adapt to the GCC ADT system and launched the ADT interfacing on August 11, 2015. Bahrain Customs are now aligned with the GCC requirements of instant claim settlement and improved transiting cargo control.

This initiative represents a radical change for traders and Customs Officers who now use bar code facilities within TWM to electronically update claims triggered from Customs declarations. Claims are automatically transmitted to the centralized GCC server gateway as soon as the import or export declarations are released.
This is considered also a huge step for the Government of Bahrain which benefits from immediate settlement of claims.

Over the last three years, Bahrain Customs have automated and operated two specialized Customs Regimes for the management of GCC Duty Claims:

Within the import or export Customs declaration form, during declaration submission by the trader on TWM, these regimes trigger a declaration sub-form called compensation sheet which facilitates the calculation of revenue, to be claimed by Bahrain to respective GCC countries and reverse. Explanations below:

As stated above, the GCC ADT is a centralized system located at the headquarters of the GCC in Riyadh, Saudi Arabia. The ADT system requires a unique identification number (called due number) for each export from a GCC country to another GCC country to be printed on the Export declaration. 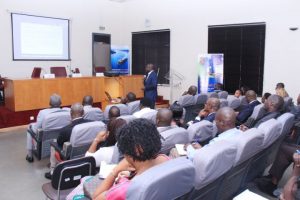 Upon assessment of the export declaration in the origin country, the corresponding due number is automatically generated by the Customs system of that country and transmitted to the ADT. The due number contains the information required to populate an import compensation sheet at the destination country (inclusive of the amount to be claimed).

Effectively the ADT system is a Near Real Time compensation system allowing the GCC countries to instantaneously settle claims and track discrepancies instead of awaiting quarterly session delays.

Bahrain Customs and the local Webb Fontaine Team were able to accommodate the required changes for ADT in record time because of the flexible TWM platform which supports cutting edge technologies for data exchange.

In addition to software integration Webb Fontaine assisted greatly Bahrain Customs Affairs in sensitizing and training the Trade Community, Customs Officers and other stakeholder for adapting the new ADT environment. Along with Bahrain Customs, Webb Fontaine organized training for 250 Clearing Agents and Traders in 6 sessions held in the week prior to system launch. A specialized Training session was held for Customs Staff especially for financial department and the Customs Offices.

Learn more about our Customs Solutions

Webb Fontaine is a leading provider of solutions for trade facilitation; powered by world-class technology, investing in the largest research and development centres in the trade area. Webb Fontaine is headquartered in Dubai, U.A.E. with a presence  across Europe, Middle East, Asia and Africa.